Revisiting an agri-investment in Zambia, anthropologist Tijo Salverda reflects on a widely neglected dimension in studies of the finance-driven land rush: the dimension of time. What happens to investment cases over long periods of time? How do investment trajectories compare with the promises made to local communities, original investors, and the larger public in early project stages? How do asset managers and operators themselves reflect upon this?

Why hasn’t the enormous farmland investment in Zambia filed for bankruptcy? I often wondered when I returned to the investment site, about two hundred kilometres from the capital Lusaka. In a somewhat morbid way, I even hoped it would go bankrupt at times, so I could conclude my research on the investment with a ‘round’ story. That is, how the European agribusiness, for which I use the pseudonym Miombo Inc. [1][2], after concerns were raised about the purchase of 38,000 hectares of land, aimed to become an enlightened example of large-scale land investment, yet gradually faced financial difficulties and, eventually, bankruptcy. End of the story. Yet instead, every time I returned, Miombo Inc. continued to operate, despite the financial difficulties it has faced ever since it ran out of the initial investment around 2016. Still the story sketched above is correct for the rest of it, yet so far, without an ending – positive or negative. The investment, in a sense, ‘muddles through’ with agricultural production, and every now and then, some new activity added. For example, in the form of a partnership with USAID or the marketing of its ‘superfoods’ for European markets. This, though, can’t hide the fact that Miombo Inc. hasn’t lived up to its financial expectations. As I have analysed elsewhere [3][4], its predictions were too rosy. ‘Unexpected’ events in agricultural production have been insufficiently considered, dams for irrigation didn’t fill up, about two-thirds of the land hasn’t been developed yet, land disputes are ongoing, and so forth. 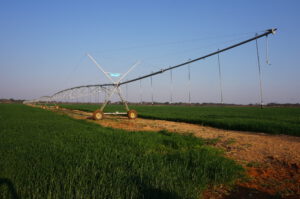 Irrigation of a centre pivot. Owing to a lack of water in the dams in July 2017, water to irrigate this field came from underground water – of which the use is restricted. Source: Tijo Salverda.

Because that notwithstanding financial struggles Miombo Inc. has evaded bankruptcy so far, two aspects may be worthwhile to look at more closely: The Miombo Inc. investment started in 2012, after a European investor and a European agricultural manager perceived it as an opportunity to purchase a large number of adjacent title deeds held by various owners, who had often hardly or only partially developed their land. Miombo Inc. planned to combine these plots of land and develop them as part of an integrated agribusiness – with agriculture and livestock. In (overused) some instances, though, the land it purchased was inhabited. Often due to a lack of clear demarcation between the plots and neighbouring chieftaincies, Zambians in search of land had ‘illegally’ settled on the land, since they didn’t have legal title to it. Hence, although all of the land Miombo Inc. purchased was titled, the firm was confronted with a number of concerns frequently discussed in the literature on the global land rush, such as the potential resettlement of and restricted land access for local rural residents. When I first visited the site in 2015, I observed that Miombo Inc. had responded relatively well to a range of concerns raised by politicians from its European country of origin. The firm had appointed a local sustainability manager and settled several replacements in a relatively decent way. Local residents expressed their appreciation of the fact that Miombo Inc. had provided them with small plots of titled land and the construction of brick houses. Could I, accordingly, present a more positive picture of a large-scale land investment – regarding how concerns raised by NGOs, academics, media etc. could pressure/convince investors to treat residents on the ground in a better way? In anthropology, my field of study, this could be a tricky position, as many peers criticise the accumulation of capital per definition. Yet, at the same time, I had to remain close to my ethnographic observations. 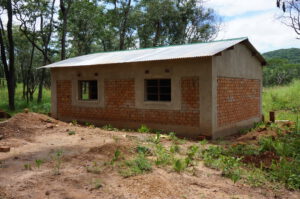 Brick house constructed as part of a resettlement scheme. Owing to delays, the house was not fully completed yet in February 2018. Source: Tijo Salverda.

Looking back ten years after the Miombo Inc. project was initiated, it shows that despite positive developments initially, it is good that I maintained a level of skepticism, i.e. that I never took the agribusiness’ self-presentation and promises at face value. Time was a crucial factor in this, I have to admit. In 2015 and 2016, the investment site was bustling with activity. Miombo Inc. was listening and responding to concerns raised by residents faced with an expanding agribusiness (with two large dams built), and even a staff member of a critical NGO acknowledged that Miombo Inc. was more open in its engagement with surrounding residents than other investments. At that time, my observations were that Miombo Inc. was a relatively enlightened example. One year later, however, cracks started to appear. 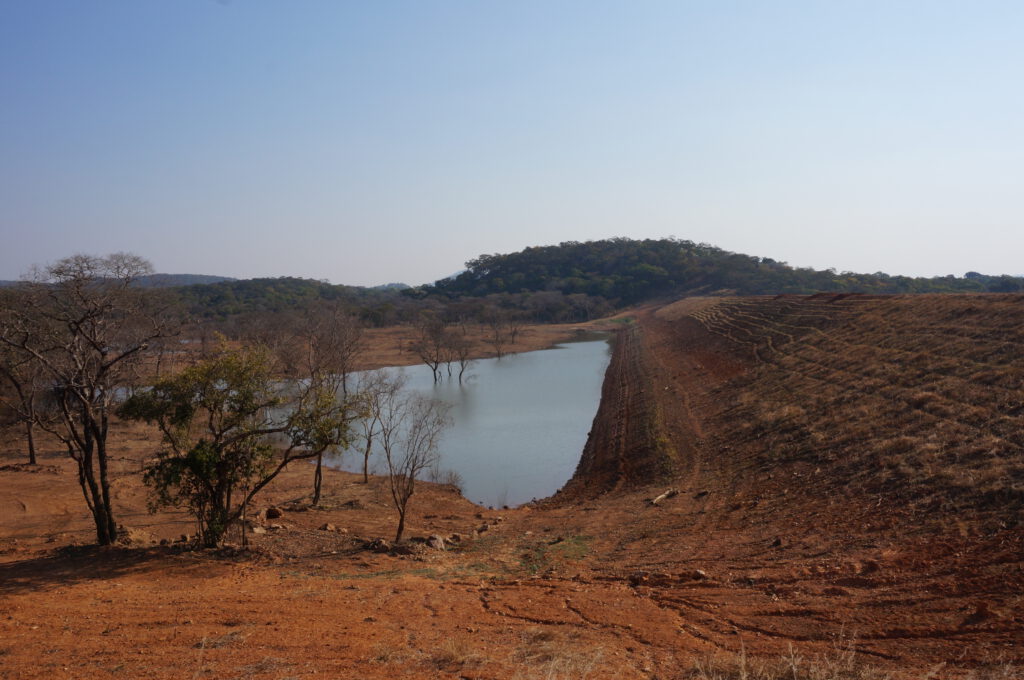 One of the two dams constructed for irrigating crops during the dry season, but standing almost empty in July 2017 – only two months into the dry season. Source: Tijo Salverda.

In 2017, it was increasingly becoming clear that Miombo Inc. was facing financial problems, though the exact situation remained unclear. Office staff on the ground in Zambia, but especially at the European headquarters, denied financial difficulties and instead argued that the project developed as planned and that investors continued to express their confidence. Laying off staff wasn’t a sign of financial difficulties, so they argued, but rather something that would always happen at a certain period in time since they no longer required particular functions. My impression, though, is that they also didn’t necessarily understand the financial situation themselves. Like so many other land investments, Miombo Inc. is, characterized by complex and obscure financial webs that are difficult to unearth (see also [5][6]). The leading investor behind Miombo Inc. has since received extensive critical scrutiny in, among others, the Financial Times and Der Spiegel, yet even seasoned financial journalists find it hard to unravel their financial webs – let alone ordinary employees. What can be observed, though, are the consequences of the financial difficulties on the ground, such as delays in fulfilling promises made to residents affected by the investment. Contrary to the other staff, the Zambian managing director candidly admitted in 2018 that Miombo Inc. was unable to respect the conditions of its original financial arrangement. After the initial investment coming from the headquarters in Europe would end, the plan was that Miombo Inc.’s Zambian operations should finance itself, and when ‘in-house revenue’ exceeded local needs, pay back the original investment. Yet, according to the managing director, it was not paying off the investment as planned and actually had difficulties financing its own operations. Maybe, he suggested, the headquarters had drawn in investors with expectations of high returns in a too-short period of time. What Miombo Inc. needed was ‘patient capital’, he argued. Notwithstanding this frankness, he  neither revealed detailed information about Miombo Inc.’s financial situation. Although the case points to a level of patience in understanding how the finances of investments may develop over time, it remains somewhat puzzling to me how Miombo Inc. maintains its operation despite the fact that for the last five years, it has been marred with financial problems. As the investment in Zambia, like many other land investments [7], never became the success investors hoped it to be, it may also be of relevance to ‘follow the losses’. The Miombo Inc. case suggests that investors can lose significant sums of money, yet, I don’t know exactly who bears the losses. Hint: not the management. It would be insightful to learn whether such losses affect investors’ personal financial situations. My sense is that they either invest on behalf of institutional investors and/or have such diverse portfolios that some losses are factored in and hardly affect their lifestyles. Nonetheless, neither that nor the financial capacity of institutional investors is unlimited. Bankruptcy or selling out to other investors is, as such, a very real possibility (in 2021, Miombo Inc. was actually sold, yet adding to the obscureness of the financial wheeling and dealing behind the investment, the main investor bought it back in 2022).

As others have equally pointed out [8][9], it is important to pay attention to tensions between the temporalities of finance and agriculture, which resulted in financial complications in the Miombo Inc. case. This indicates that, in our investigations, it makes sense to closely follow land investments over extended periods of time. Not necessarily to confirm that lofty promises are not lived up to, but rather to better understand financial dynamics – and their impact – over time. I consider it, as such, very unfortunate that investors tend to be so reluctant to share more detailed reflections on the financial dynamics – and difficulties. Possibly this has to do with the belief that one shouldn’t show signs of weakness or doubt. Only success stories count in finance, despite the fact that investors are savvy enough to know that many promises are too optimistic. That the Zambian managing director was more reflective was probably because he could forward the blame to abstract investors. In contrast, he also was less in need of keeping up appearances to financial markets than staff in the headquarters. More openness, in my opinion, could provide insights into what investors perceive as their room for maneuvering in the face of financial difficulties. Following this, they may realise that there is room for investment narratives that allow for more uncertainty and doubt – which could even enhance a level of understanding among residents affected by land deals. Or maybe, their promises should be more realistic from the start and/or with the sufficient available budget allocated to these promises. Yet also, when investors openly admit that they don’t see any alternatives, this would at least allow for discussing (structural) constraints shaping the financial development of land deals. Next to the wish for a round story, my ‘hope’ for bankruptcy was, in a sense, partly born out of frustration with this lack of reflection and honesty, as I hoped that after the facts, insiders would be more open to reflecting upon the case. In reality, though, bankruptcy wouldn’t have been the preferred outcome, because despite its shortcoming Miombo Inc. still provides an (indirect) income to many. Even if we often would like this to be the case, the developments in the Zambia case show that life doesn’t necessarily exist of neat, round stories. More interesting exchanges with investors about how investments develop over time wouldn’t have changed this either. Yet these exchanges would at least provide additional insights about the ‘muddling through’ of investments.