We have assembled a data bank on agricultural investment data that draws on data provided by the OIO (and its predecessor), as well as by the NGO CAFCA. We partly ground-truthed this data by analysing media reports and investor websites. This allows us to develop a comprehensive and granular picture of the socialites, spatialities, and temporalities of agri-investment flows into the “Kiwi countryside” from 2001-2021, something unique in the world of agri-investment research! The data from 2001 to 2017 was mainly based on the work of Tobias Klinge, University of Leuven, whose pioneering work has been published here. With his help, we have continued the data collection and analysis for the further period until 2021. We take a broader view on agri-investments than normally taken in the land rush/grab literature. Thus, we deliberately also count cases where e.g., a milk processing plant plus the land surrounding it was acquired by a foreign investor, as well as cases of forestry investment. This allows us to arrive at a more comprehensive understanding of how many nature-based resources and productive capacities have moved to foreign ownership. We also include carbon forestry as a potential domain of investment in our sample because of the New Zealand government’s afforestation policy after decades of promoting agricultural production.

Our data contains all transactions on agriculture and forestry with at least 25 percent foreign equity being involved. This includes transactions where farmland has been directly inquired, but it also involves investments into processing facilities which usually come along with a parcel of property, too (e.g., a milk factory with some land). This is important to note: While farmland and forestry contribute significantly to hectare sizes transacted, investments into (processing) facilities make up a good deal of the NZ$ amount transacted. For more information about our methods, click here.

You can mine the data in the Shiny-App below, but as a summary, we can arrive at the following conclusion: 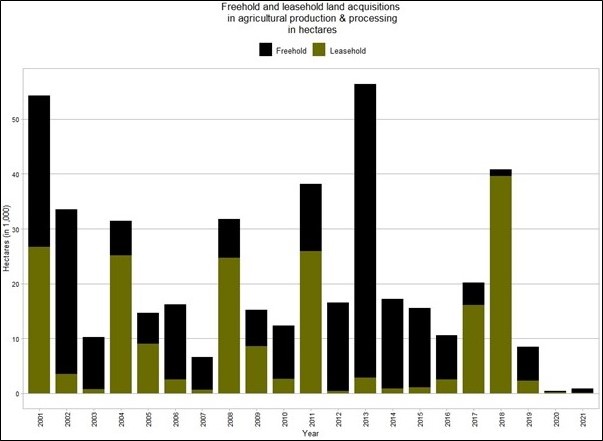 Freehold and leasehold land acquisitions in agricultural production and processing. Source: Own elaborations 2022. 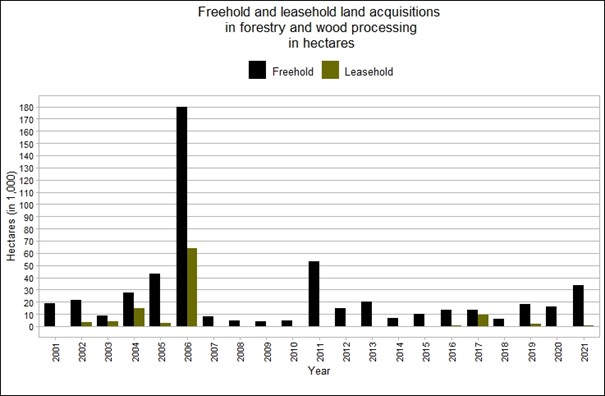 Freehold and leasehold land acquisitions in forestry and wood processing in hectares. Source: Own elaborations 2022.

Explore the Shiny-App by clicking on it

Please allow for up to 30 seconds of loading time (especially on mobile phones).